The popular design event Maison & Objet is just around the corner. The interior design fair will be held between March 24th-28th at Paris Nord Villepinte. To help you enjoy the days spent in Paris during this modern event, Zagas selected our top picks for the best places to stay and eat, in the city of lights! 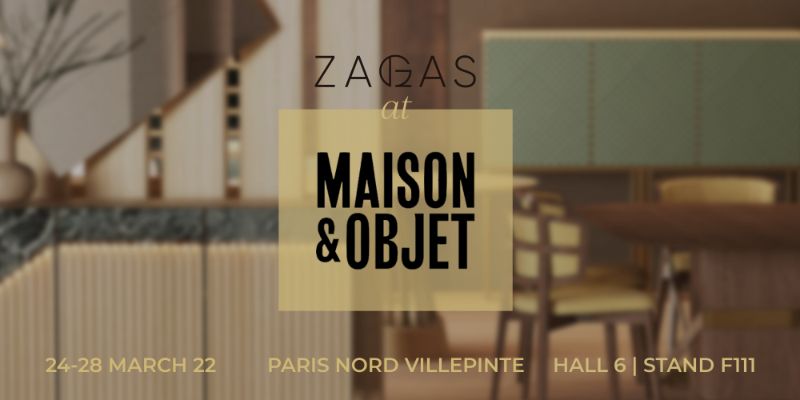 WHERE TO STAY
Hôtel de Crillon, A Rosewood Hotel
The Crillon has long been a sentimental favorite among the French. It"s a splurge, but fans of French history and style or hotel junkies with a running list of global icons to check in to won"t be disappointed. After a day out on the town, relax in the Les Ambassadeurs lounge, which draws see-and-be-seen Parisians with live music and a selection of over 100 Champagnes, or in the new spa, with its indoor heated pool and treatments inspired by the beauty secrets of French grandmothers and great-grandmothers.
La Réserve Paris - Hotel and Spa
It"s the most beloved address in the French capital for fashion editors and the go-to for regular visitors to the city who want to feel like they’re staying in a private mansion, with just 40 rooms in a fine hôtel particulier designed by Baron Haussmann for Napoleon III’s half-brother the Duc de Morny in 1854. Its position, on a quiet tree-lined street, moments away from the Place de la Concorde, is propitious. This is somewhere you"ll want to come back to time and again.
Le Meurice, Dorchester Collection
Ageless Le Meurice has always been tolerant of experimentation and eccentricity. No wonder it was Salvador Dalí’s favorite. Most of its suites, including the penthouse, Belle Étoile, have been redone in silk and velvet. If you value location, are interested in design, and appreciate service that puts a premium on privacy, Le Meurice is worth the splurge.
Le Roch Hotel & Spa
Reflecting its surrounding area—where the Tuileries gardens, Place Vendôme, and iconic Colette boutique mingle with residential buildings and neighborhood schools and churches—Le Roch tempers high design and haute cuisine with a relaxed, unassuming vibe. The first hotel project for designer Sarah Lavoine, known for her Parisian boutiques and lifestyle product collections, the tucked-away hotel opened in 2016 (pronounced “la rock”) and nails the home-away-from-home feel.
Shangri-La Hotel
In 1891, Prince Roland Bonaparte—grand-nephew to Napoleon—chose a prime setting near the Seine River to build an opulent palace, complete with an elaborately carved façade, a vaulted ceiling emblazoned with zodiac symbols, and a dramatic "Stairway of Honor" made from brass and forged steel. Following a meticulous restoration, the landmark features a dome-topped marble entryway, original wood floors, stained glass windows, and hand-carved mahogany panels—plus that famous staircase.
The Peninsula Paris
After sitting empty for decades, a former 1908 hotel has been transformed into the first Parisian outpost for the Hong Kong-based Peninsula brand—and one of Paris’s newest Palace-grade hotels. Four years of work by a stable of skilled artisans have resulted in airy, refined public spaces, where a muted cream palette is accented by restored original wood, decorative stonework, and 40,000 pieces of gold leaf.
WHERE TO EAT
Beefbar 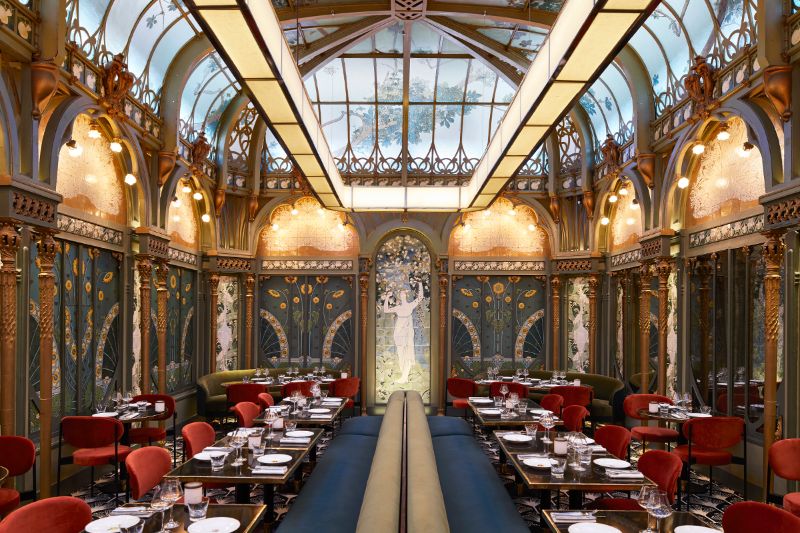 Settle in the red velvet banquettes of the Beefbar to have one of the royal dining experiences ever. From its tables made in rich material to the paintings on the wall and the mosaics, everything in the decor of this restaurant will draw your attention. Here, the specialty is meat. It is cooked in all the ways you could ever imagine and with many foreign flavors. Your taste buds will travel from Japan to Korea not to mention Italy.
Bouillon Julien
The Bouillon Julien will captivate you with its beauty and special charm. Indeed, a goldsmith’s work led to the creation of this majestic palace. From the glass panels, where four flower women appear, the personification of the four seasons (a reference to the iconography of Alphonse Muchas), to the tiling designs of the glass roof as well as by the dominant color of the place, namely a magnificent celadon green. Some of the ŕ la carte dishes you can enjoy are beer-braised pork knuckle on a bed of sauerkraut or a duck leg confit with mustard sauce and fries.
Le Meurice Alain Ducasse
For this two-Michelin-starred restaurant at Le Meurice, Philippe Starck took inspiration from the Salon de la Paix at the Château de Versailles. The elegant room features crystal chandeliers, elaborate frescoes, plenty of marble, and antique mirrors. But there’s also a contemporary spin, here—note the Eero Saarinen Tulip chairs (reproduced by Knoll) and the water-themed Murano glass sculptures by Aristide Najean.
Pink Mamma
This vibrant restaurant decorated by Martin Brudnizki spans multiple floors, and each one has its flower-inspired look. On the top, you’ll find a greenhouse-like space with vines hanging from the rafters, and on the bottom, there’s an all-red speakeasy with brass accents. Between them, there’s everything from a timbered antipasti bar to a tiled space in all shades of green.
The Ice Kube Bar
In an altogether restaurant and bar style, this place is solely made of ice. Dive into an icy world to enjoy the best cocktails at a -20°C temperature. Do not forget to bring along a coat and some gloves. Then, settle into the apocalyptic overgrown jungle-themed shelter of the restaurant named Apres (after), to have the most delectable traditional French cuisine dishes as well as some Italian classics, cooked with fresh and seasonal ingredients.
Train Bleu
Built for the 1900 World’s Fair, the Gare de Lyon is a palatial train terminal designed to show off the city’s ingenuity. Its grand Le Train Bleu restaurant, lavishly decorated in Belle Époque style, was built to greet the (hungry) visitors traveling to the fair. Throughout the restaurant are original murals of different regions of France.