Interior design and architecture are industries where experimentation is a must. Discover nine homes with jaw-dropping interior design elements that would make mid-century modernist architect Frank Lloyd proud. From a Le Corbusier–inspired skylight turned rooftop pool to a hidden arcade, these radical spaces are proof that architects and designers are flexing their creative muscles.
Ios, Greece 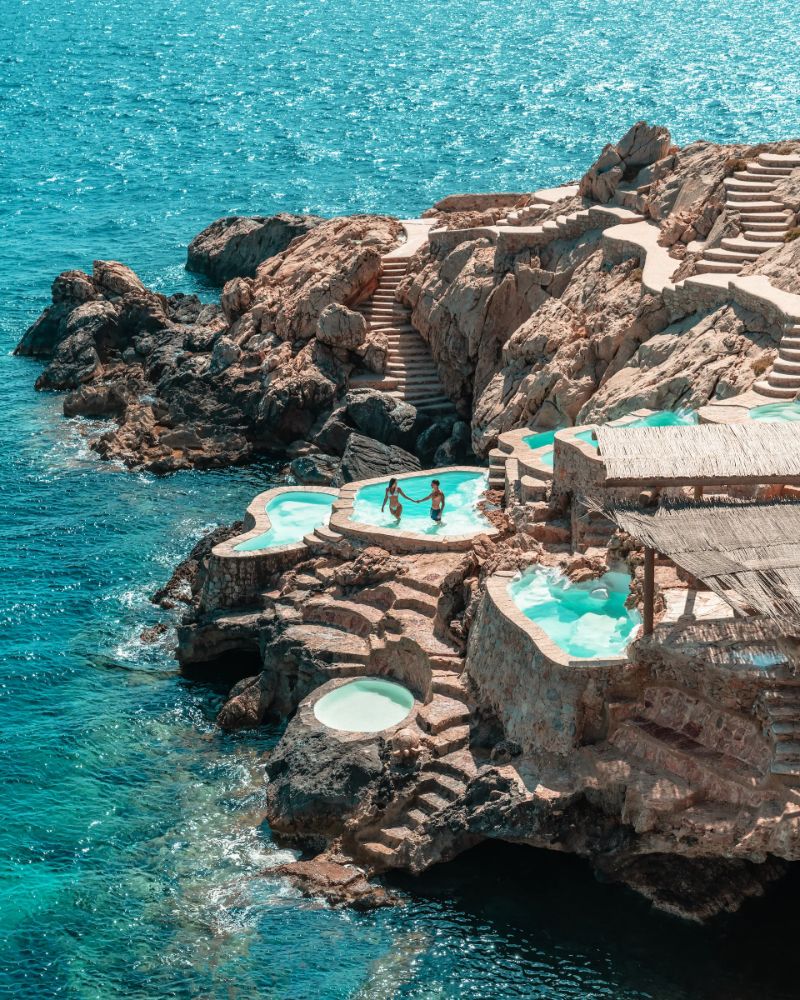 Angelos Michalopoulos designed a series of marble pools carved into the natural rock formations scattered across the shores of the Aegean Sea. Water is sourced directly from the sea to both eliminate water consumption and avoid taxing the already overburdened freshwater supply. It's also highly sustainable with minimal waste.
Seattle, Washington 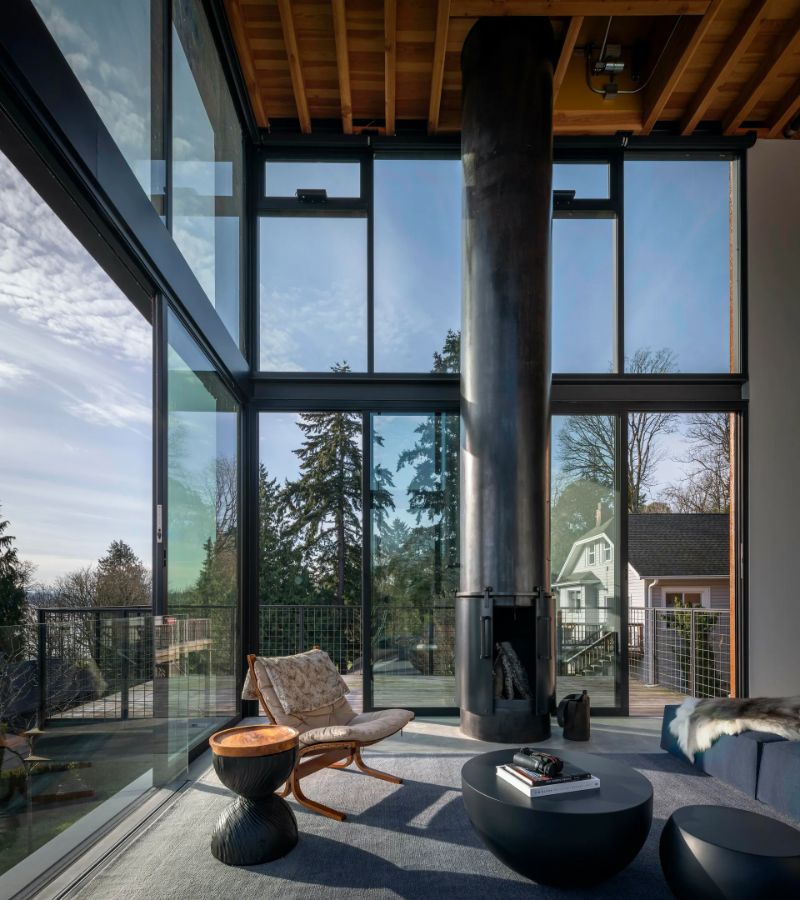 The home was designed by AD100 architect Olson Kundig for a thermodynamic engineer and inventor. The living room is cantilevered by a single 30-foot-tall steel pipe that houses a Rumford masonry fireplace. System names are labeled with the names of the engineers and craftspeople responsible for their installation.
Miami Beach, Florida 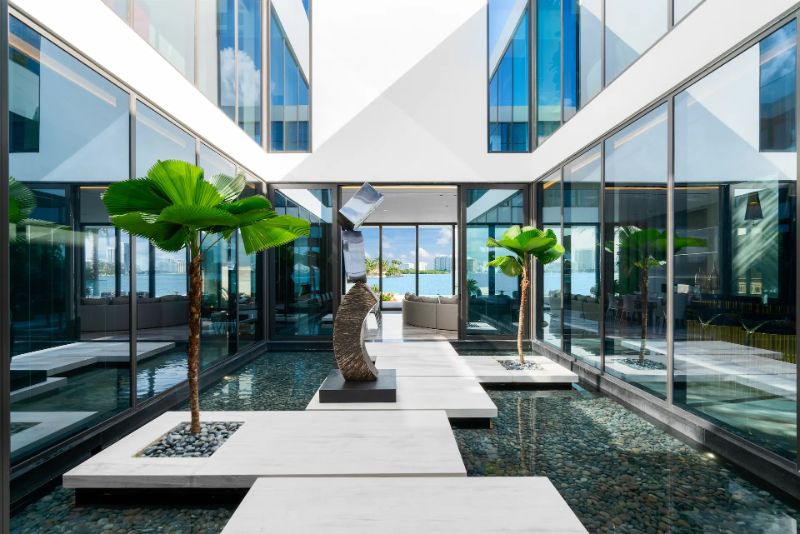 Choeff Levy Fischman created a 460-square-foot floating atrium. The atrium appears to hover above a shallow pool of water. “We want the residents and their guests to have a zen feeling,” says design principal Paul Fischmann.
Marina del Rey, California 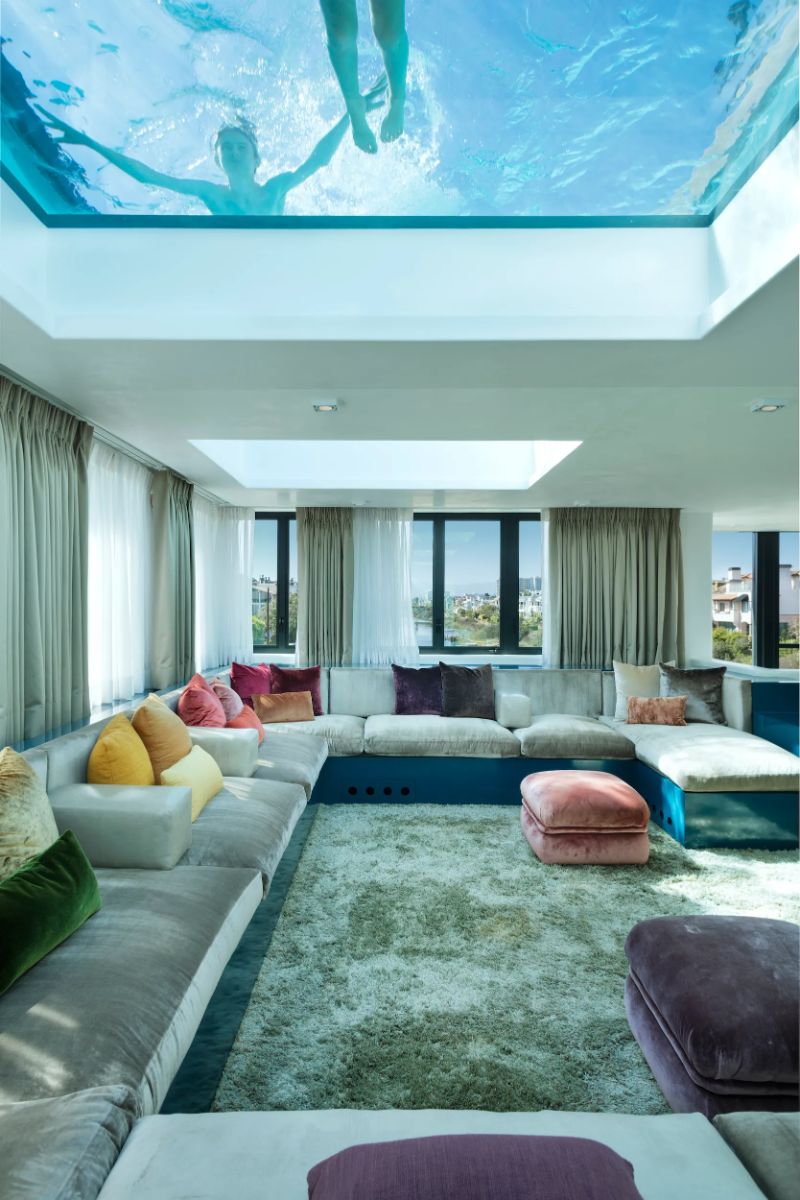 When Alexandra Loew decided to renovate a Marina del Rey property designed by Michelle Ertzan, she understood it wouldn't be simple: While the interiors, which were filled with some excessive extravagances, needed a serious refurbishment, the outside was as exquisite as any 1960s Parisian Le Corbusier structure. A 10,000-gallon shark tank was one such unanticipated gift. Her first task was to remove the tank and turn it into a conversation pit that was positioned below an existing rooftop pool.
SEE ALSO: PLAN A LATIN GETAWAY IN ONE OF THESE 7 LUXURY HOTELS
Houston, Texas 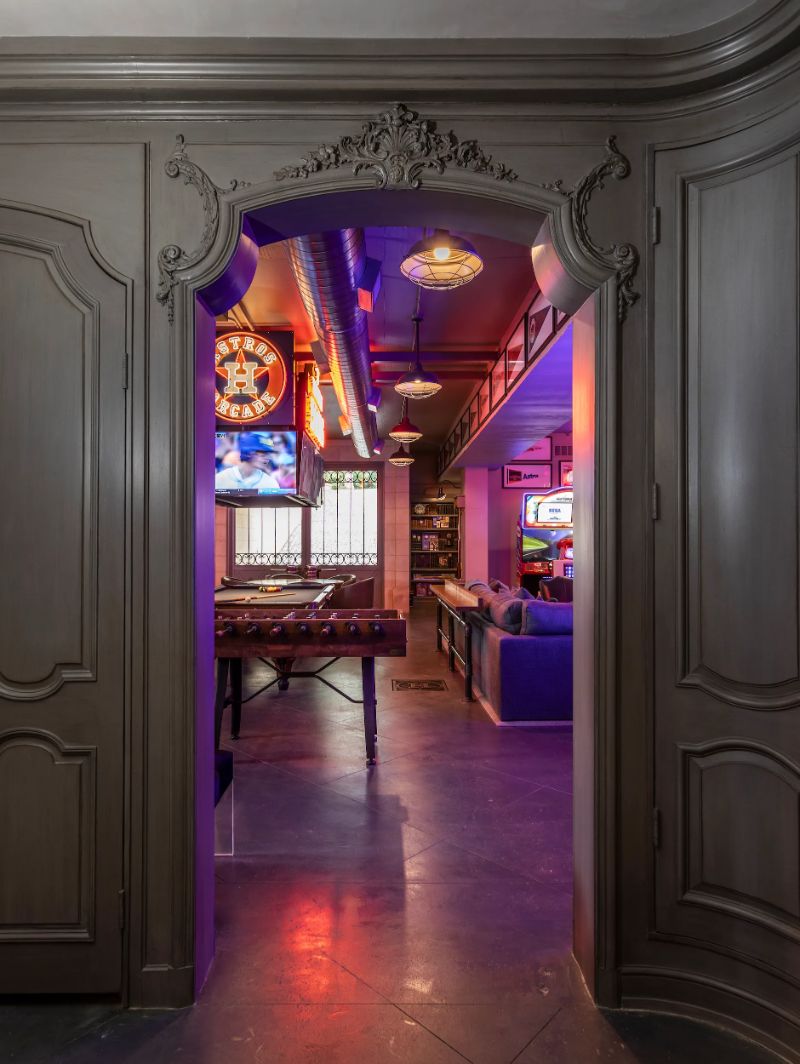 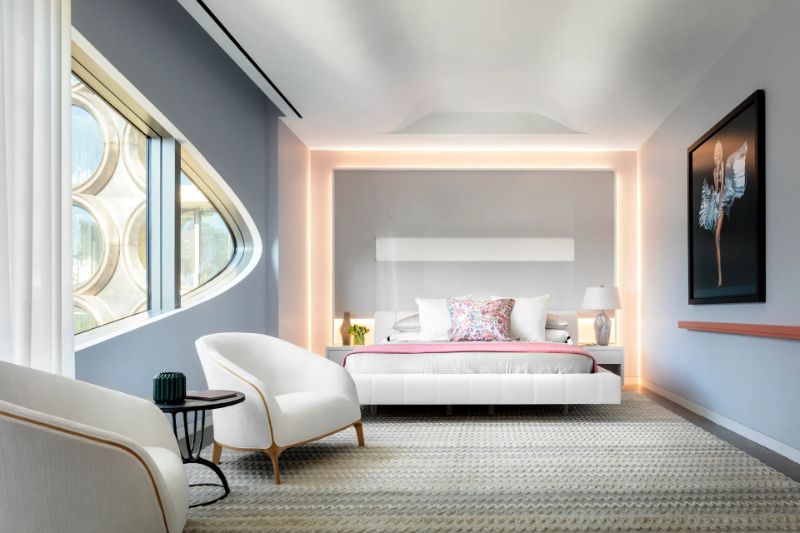 A penthouse in New York City's High Line has been designed by Zaha Hadid Architects. 520 West 28th Street features hand-brushed and -tinted windows, in such a way that celebrates the layered civic realm of the High Line. The primary source of light is an architectural LED system built into the wall behind the bed, creating a sultry and natural-looking bedroom experience for occupants.
Tuscany, Italy 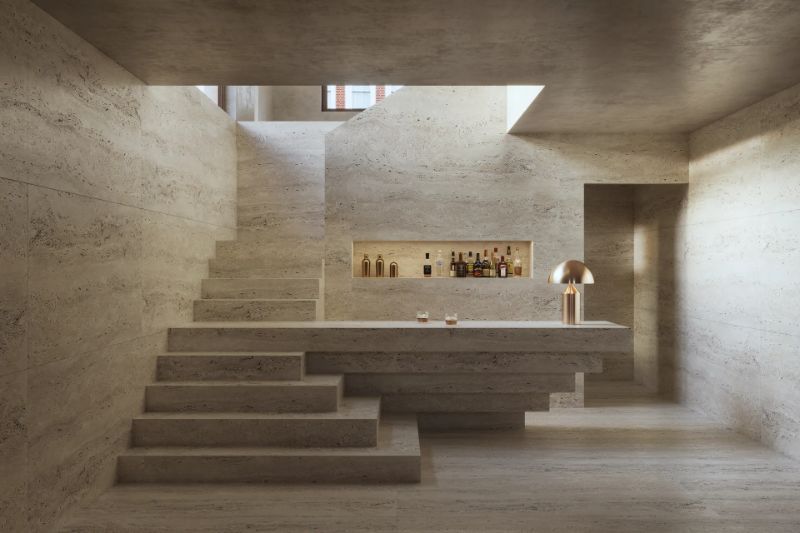 Architects Gori & Yoon sought a unique take on Italian architect Carlo Scarpa's signature style for a Tuscan villa. The result is what they call a “well of light,” made possible by removing a large swath of the ceiling.
Encinitas, California 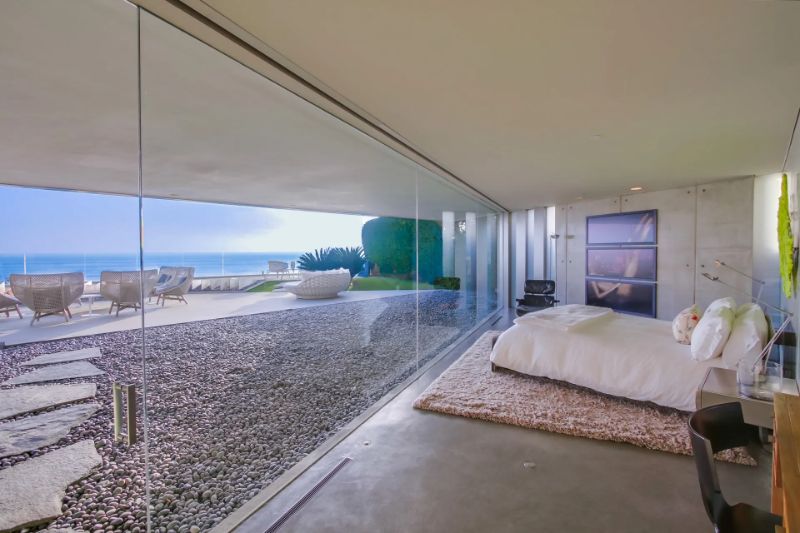 Wallace E. Cunningham's Crescent House resembles something out of an episode of Westworld. The four-bedroom home sits on a circular terrace overlooking a crescent-shaped infinity pool. It was designed to feel upside down, with all the principal rooms on the top level.
Miami, Florida 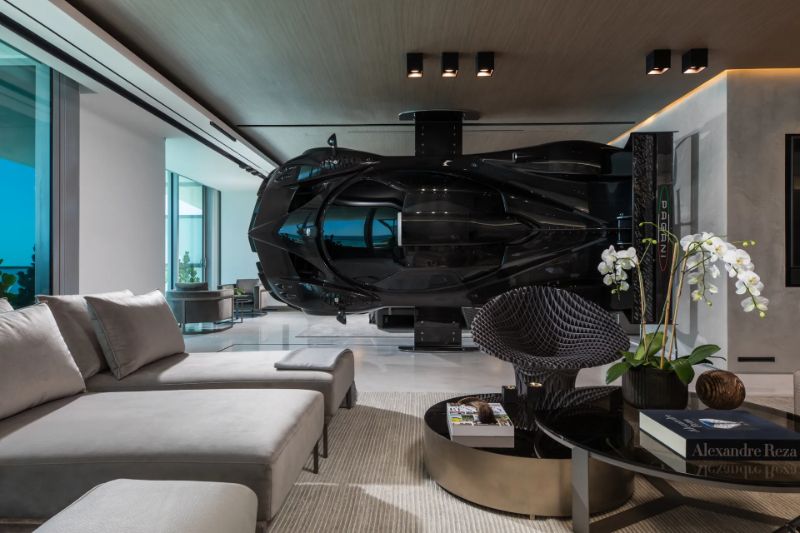 $1.5 million, 800-pound black Pagani Zonda R. Only 15 are produced each year. A Miami resident took down the wall that separates living space and bedroom and enlisted experts to design an aluminum-and-carbon-fiber stand for the car. That's right: he replaced that wall with the luxury car.
SEE ALSO: 7 OLDEST HOTELS IN THE WORLD WITH TIMELESS INTERIORS
NEXT ARTICLE