Celebrities have an impact on how we dress and even think. Why not let them have a say in how we decorate our homes? Discover 12 celebrity dining rooms that will impact your interior design project, thanks to access to the world's most premium residences and interior designers. From organic design to effortlessly stylish dining rooms to lavish and lush colors and patterns on – and around – the table, there's something for everyone.
ANNE HATHAWAY AND ANDY SHULMAN 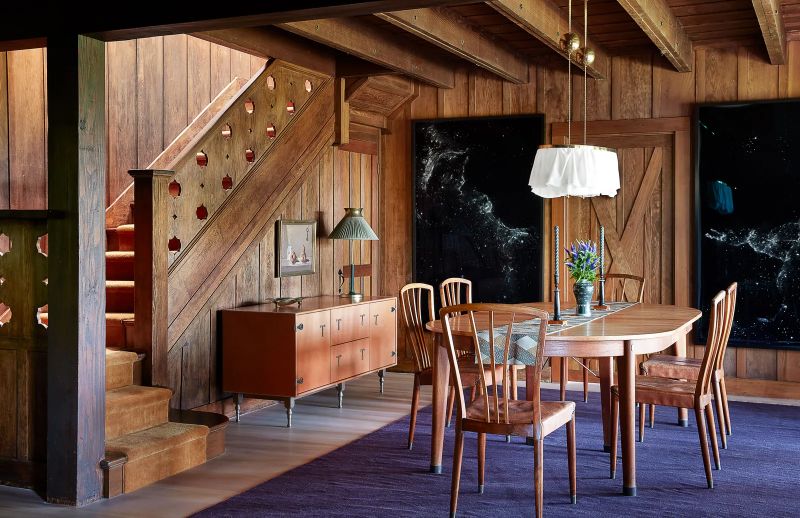 Anne Hathaway and her husband Andy Schulman had a classic Alpine-inspired hideaway reimagined by Studio Shamshiri. The dining room of the couple is composed of wood and features an attractive light above a vintage dining table.
CHARLI XCX 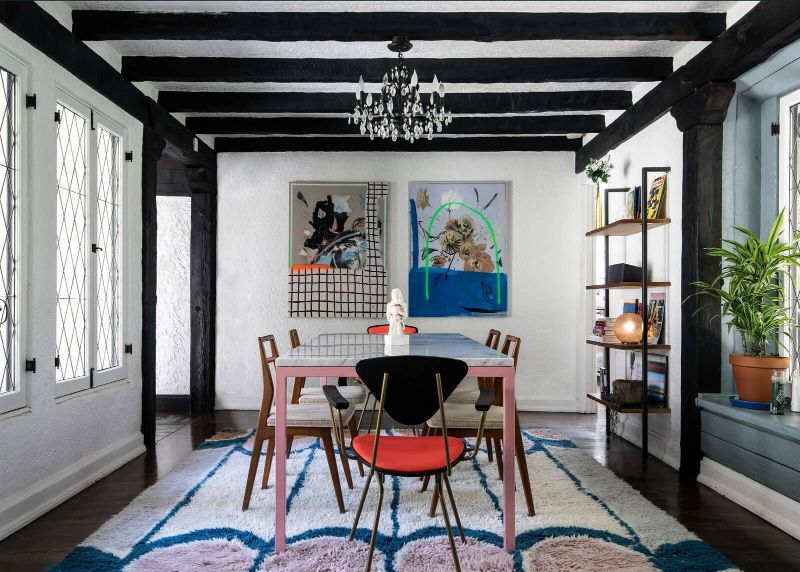 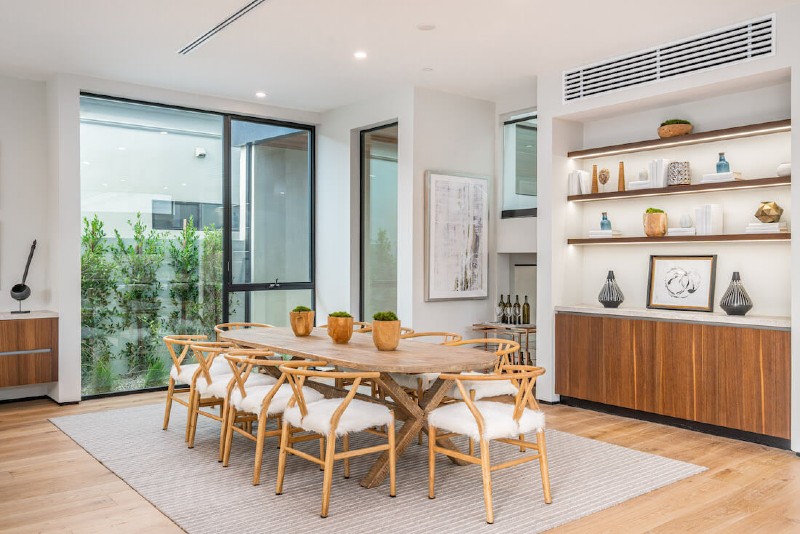 The expressions that best define John Legend and Chrissy Teigen's house are minimal and organic. Natural materials and neutral colors are the order of the day. As a result, one of the most effortless chic celebrity dining rooms ever is the simple dining room.
ELLE MACPHERSON 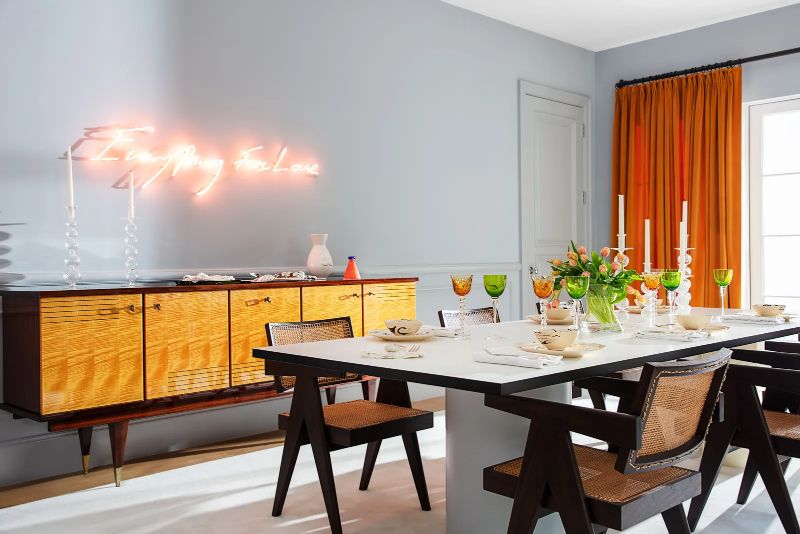 Sawyer | Brenson, an AD100 firm based in New York City, collaborated with Elle Macpherson for two months to design the newest Elle Macpherson home in Florida. The supermodel and 90s heartbreaker desired a sustainable yet modern design for her new home. Contemporary artwork, such as a neon installation by British artist Tracey Emin, and historical furniture, such as 1950s Pierre Jeanneret chairs and a mid-century modern cabinet, are featured in the dining area.
SEE ALSO: INTERIOR DESIGN TRENDS TO INSPIRE YOUR MODERN DINING ROOM
JESSE TYLER FERGUSON AND JUSTIN MIKITA 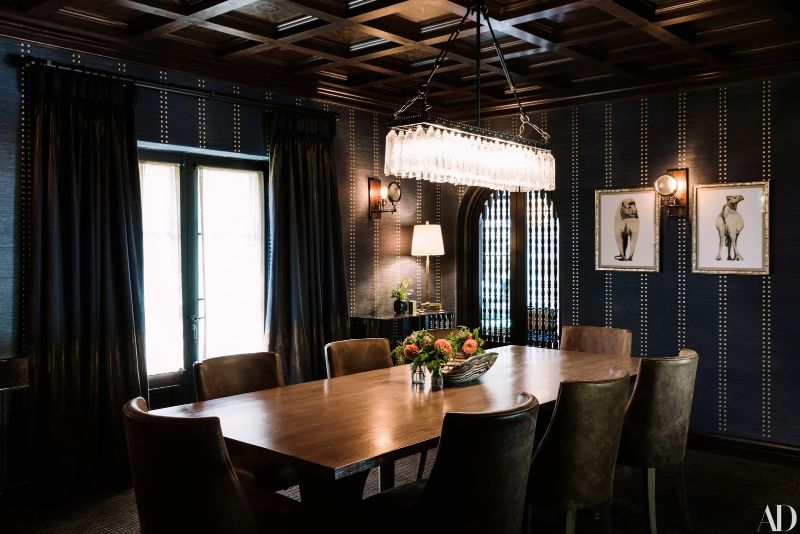 Jesse Taylor Ferguson and Justin Mikita own one of the most opulent celebrity dining rooms. To bring his family home in Los Feliz to life, the Modern Family star and Justin Mikita partnered with set decorator-turned-interior designer Peter Gurski. The Spanish Colonial property's interior is stylish and elegant, with a strong art deco influence.
JESSICA ALBA 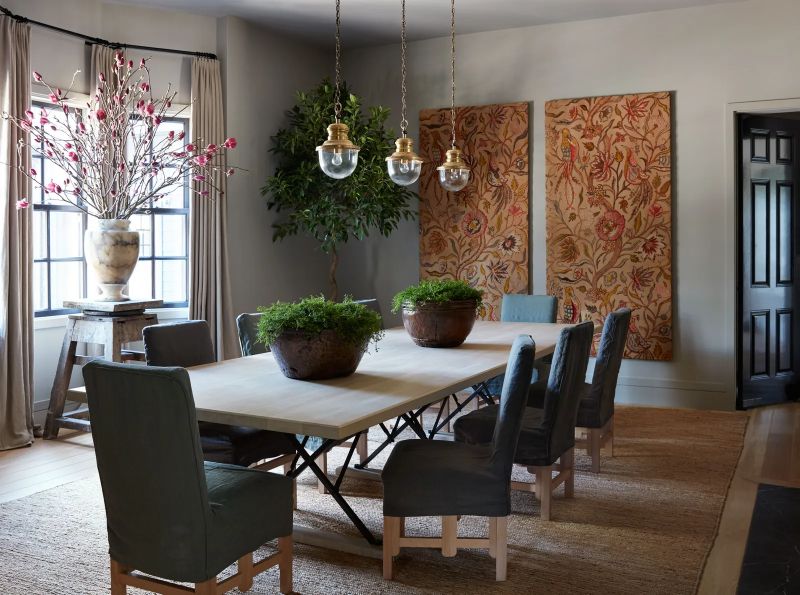 Jessica Alba's family house in Los Angeles was designed by Clements Design. The interior design is transitional, with a mix of modern and traditional furniture as well as eccentric accessories in the same space.
KENDALL JENNER 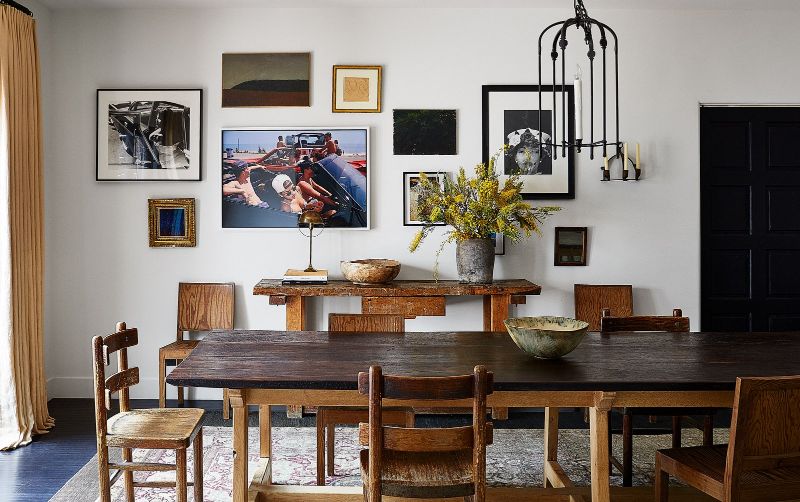 Kendall Jenner's house in Los Angeles is one-of-a-kind, and her dining room is no exception. This is one of the most gorgeous celebrity dining rooms, designed by mother and son interior design duo Clements Design. Kendall Jenner's dining room has a worn-out look to it, as if she's walked into a genuine 1920s Hollywood home that's been lost in time.
MARK RONSON 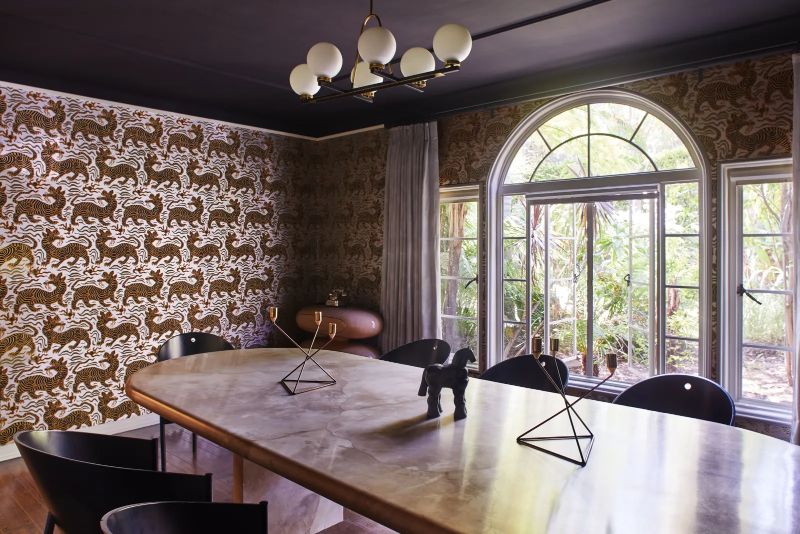 Mark Ronson's Los Angeles residence exudes eccentricity, making it one of the most opulent celebrity dining rooms. The ceiling is painted black, the wallpaper is lavish, and the fittings are brass. This eccentricity may be found throughout the house. Mark Ronson's Los Angeles home, in fact, is the ideal setting for 1930s Hollywood bohemian living, with animal print, golden chandeliers, and vivid yet traditional colors like blue cobalt.
SEE ALSO: 7 CONTEMPORARY DINING ROOM INSPIRATIONS
MILA KUNIS AND ASHTON KUTCHER 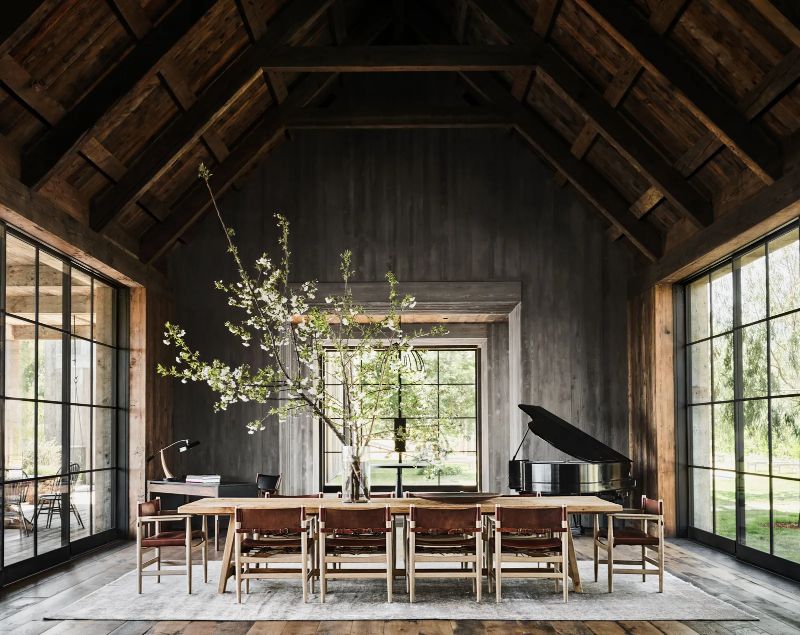 The family home of Mila Kunis and Ashton Kutcher on the Beverly Hills hilltop is a stylish farmhouse. Backen & Gilliam Architects designed the barn-like home that Charles & Co. Vicky Charles decorated, and it's one of the most surreal celebrity dining rooms — where rustic and luxury mix seamlessly.
MILEY CYRUS 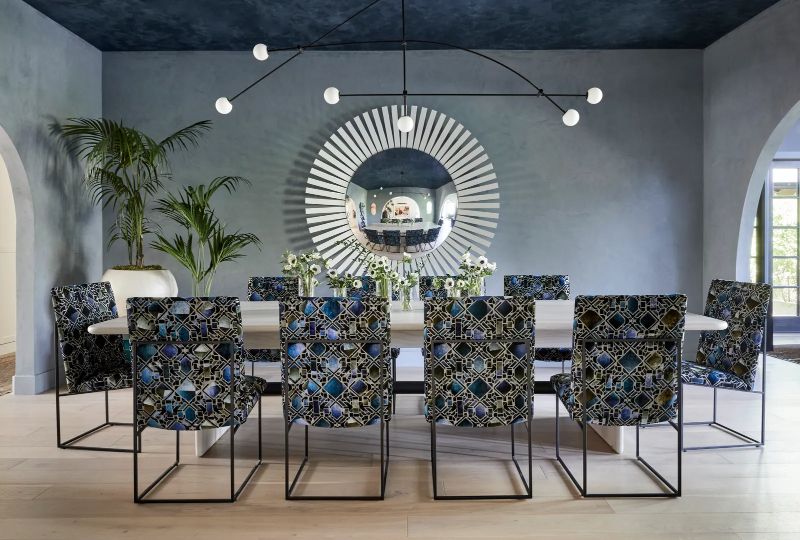 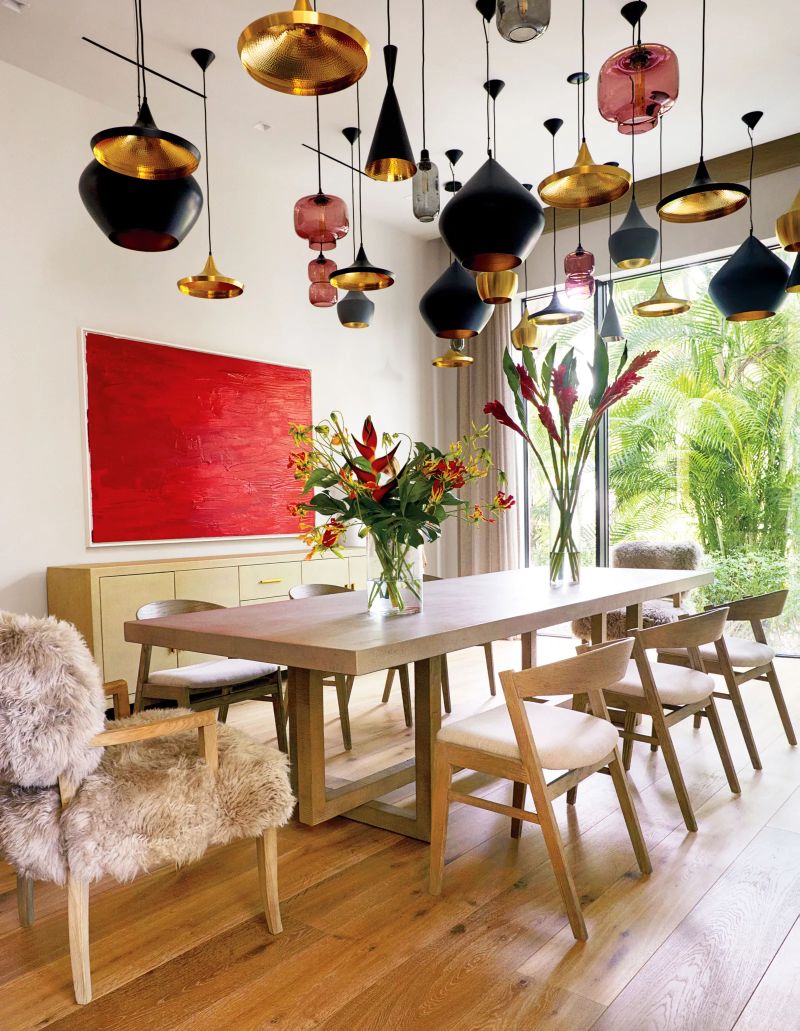 Serena Williams collaborates with her sister Venus Williams and her V-Starr interior design firm to create her ideal home in Florida. The crimson artwork on the wall, created by Serena Williams, and the several lighting fixtures above the dining table give the simple celebrity dining room a striking mood.
SETH MEYERS 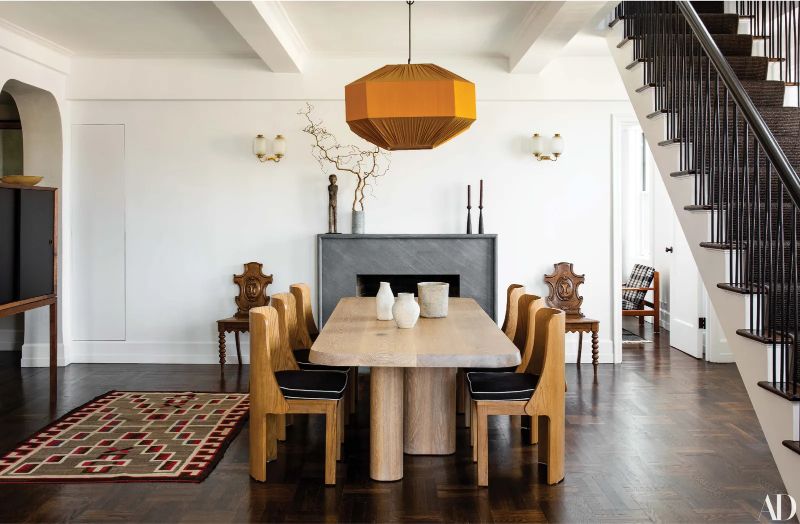